After shedding two-thirds of its branches last year, one of our giant red gums is now a forest of new shoots.

As the two remnant trees on our farm, River red gums (Eucalyptus camaldulensis) hold a special place in our hearts. Our red gums are bent and stretch up the hillside away from the prevailing winds. Red gums are not unique to the Fleurieu however, in fact, their high level of adaptability means that they have a distribution across Australia, most commonly occurring on floodplains and waterways as well as throughout higher rainfall regions.

Not dead yet! After apparently dying in an unusually dry winter and spring, this year-old red gum seedling has re-sprouted from its base after receiving about 10mm of rain over several weeks.

With red gums as a significant species in the past ecosystem of our property, they’ve been a clear choice for revegetation. When planting, we’re constantly inspired by their resilience. I’ve heard it said that red gum roots grow at a centimetre a day, which puts them at over three-and-a-half metres a year. If it’s true, then it’s an indicator of their startling ability to find water and nutrients. We’ve been amazed by some of our red gums that have shot to almost 1.5 metres after a couple of years in the ground, but also by their apparent capacity for dormancy. Some seedlings will sit in dry, cracked clay soil for months on end, leaves green but not growing. Then, with a decent rain, they burst into new growth. Likewise, others appear to have died, leaving nothing but a dry stick until the opening rains of autumn when they reshoot from the ground, sending out a profusion of leaves and spindly branches. We’ve noticed some other plants behave similarly – the occasional melaleuca or acacia for example – but none so consistently and successfully resurrect themselves as the red gum.

END_OF_DOCUMENT_TOKEN_TO_BE_REPLACED 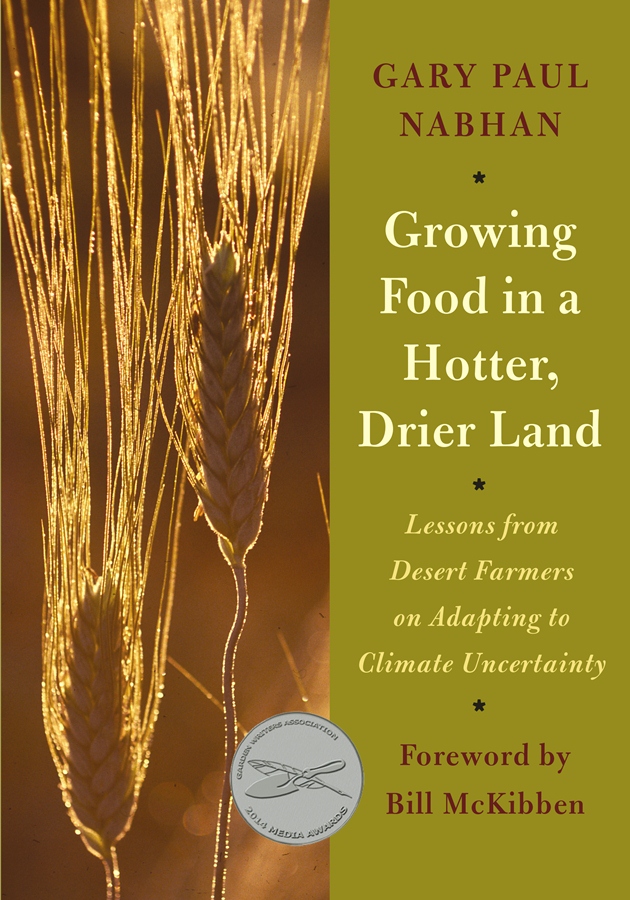 Years before there was talk of locavores and 100-mile-diets and omnivore’s dilemmas, I came upon Gary Nabhan’s book Coming Home to Eat, a personal account of his experiences striving to solely eat food produced in his home bioregion of the US-Mexican borderlands in southern Arizona. His observations as renowned desert ecologist and ethno-botanist redefined how I thought about food and sustainability and accompanied me on my own sustainable food explorations for years after.

I get the feeling that his latest book, Growing Food in a Hotter, Drier Land: Lessons from Desert Farmers on Adapting to Climate Uncertainty (Chelsea Green, 2013), may be another companion for us in our adventures on the farm. While Growing Food is as practical as its title suggests, it is permeated by Nabhan’s respect for the insights of cultures deeply connected to the land, and his belief that communities connected to their bioregion are the most resilient in the face of environmental change. END_OF_DOCUMENT_TOKEN_TO_BE_REPLACED

Following the evacuation of its previous residents, the bee-house has not remained vacant for long. Offering waterside views and passive solar design, resident roos have recently been spotted conducting an open inspection of this prime real estate.

A couple of weeks ago, we checked the hive and all seemed well. We found the queen, the bees were busy and on opening the hive there was the seductive scent of honey. The colony had spent weeks drawing out the honeycomb on the hive frames, and seemed to be just beginning to lay a good pattern of brood (young).

There were a few ants that seemed to be making a nuisance of themselves. The bees would try to expel them from the hive, while the ants would cling on to their legs and wings pulling them off-balance. After a little research, we thought we’d apply cinnamon, a widely recommended treatment for ant problems. The bees were irritated by it, and the ants unmoved. Next, we constructed a hive stand with the intention of putting the legs in tins of oil as a physical barrier for the ants, but unfortunately for us, it was too late. END_OF_DOCUMENT_TOKEN_TO_BE_REPLACED

November marks one year since we began our relationship with this patch of soil, grass and rusty car parts. If the permaculture imperative is to obtain a yield, then the yields of this first year have been largely intangible, but no less real. It has been a year of observing and learning about the land, ourselves and what we can do here. I remember emotions I was feeling about this project a year ago, and I think my terror has been mostly balanced by a sense of calm. Where 12 months ago I was overwhelmed by the scale of our ignorance, now, our ignorance is still largely intact, but I’m more confident in our collective abilities as a family, nested within a community, to unravel the challenges we face. END_OF_DOCUMENT_TOKEN_TO_BE_REPLACED

When we first dug the post holes for the bee house, it was winter. It was a clear, sunny day, but only 30cm underground it was a river. Now, the soil has hardened again and already cracks are forming where the sun has touched between the tussocks. It is the time of insects: the long grass shimmers with the darting of grasshoppers and butterflies, the red gums are awash with ants and centipedes uncurl in dark, hidden places. It’s a good time to introduce our first livestock – bees – and to finally complete their shelter: the Bee House. END_OF_DOCUMENT_TOKEN_TO_BE_REPLACED

From where we'd rather be...actually there's nowhere we'd rather be! Big thumbs up for the kids' new hammock under the old gums. So glad to finally be here at last! Happy 2023 all 🌿
First fig of the season. A monster Black Genoa, organically grown in our little windswept orchard.
As proof of the recent confusing weather patterns, these Amanita mushrooms came up a few days ago! We've never seen mushrooms here in November, they're usually all finished by August, and we've never seen this species or anything like it here before! Amanitas are mycorrhizal (they form a partnership with a tree/plant to help feed and nourish it in exchange for sugars) and these ones were growing only 1m or so from a Eucalypt we planted about 7 years ago which has always grown really well. I just wonder if this species has been there all along, waiting for perfect conditions of 45mm in one day in Nov to be able to fruit! And now it can reproduce and spread to other parts of the farm. It makes me wonder what else is out there ready to take advantage of crazy climactic conditions!
As long time admirers of @thegreenhorns we're thrilled that Joel's comic about weeds will be published in Vol. VI of "The New Farmer's Almanac". It all releases this January and pre-orders are available now through @chelseagreenbooks
Frog spawn! 🐸 We've never seen this before at Yarnauwi but with the best rains in years our dam is filling up, the air is full of the calls of the Spotted Grass Frog and the Common Froglet, and we seem to be providing enough grassy water habitat for these eggs to be laid with enough shelter for them to grow into the little black tadpoles you can see inside! Lying next to the dam listening to frog calls definitely takes us to our happy place and makes it all so very worthwhile 💚
2022 marks a decade since we started working to regenerate Yarnauwi. To celebrate Joel's been working on a little comic to acknowledge all the amazing folks in our community near and far who have supported us and this place over the last 10 years. Here's a sample, but the whole thing is on our blog - follow the link in our bio!
Thanks to everyone who came joined us on our farm tour as part of @historyfestival and @heritagefleurieucoastfestival - we really appreciate your interest and enthusiasm!
We're honoured to have this story pop up on @abcnews_au sharing some of the work we've been doing to regenerate our patch. Our deepest thanks to all the friends, neighbours and family who have helped transform the property over the last decade!
It's been a good year in our little orchard, with plenty of ripe figs for us - and others! Here's one we found, positioned just like this on top of a fence post. I'm looking for a raven with fig juice running down its chin.