A Juncus seed head on one of the ridgelines.

With a landscape scarred with a history of erosion, and soil associations that the CSIRO SoilMapp discusses in the most nervous of tones, we’d been apprehensive about this season’s heavy rains. After two days of constant downpours, the water sat on the surface, filled every hollow and started to run in strange new flow patterns along the most unexpected of ridgelines. Neighbours told us they hadn’t seen rain like that for some years, and that erosion headcuts had been reawakened all through the surrounding valleys. 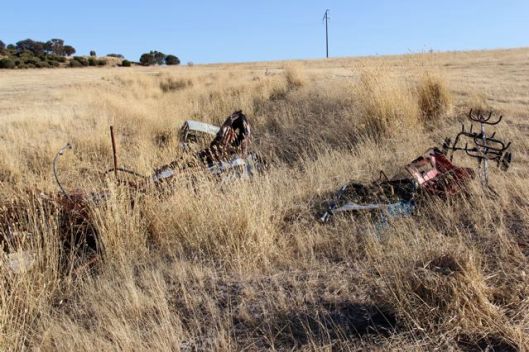 Zephyr Creek before and after: now with less car bodies and more trees!

It was a relief to see that our improvised erosion control strategies (use local materials; slow water flow with rock, fallen timber or mulch; always work on contour; get plants in the ground) had all worked to some degree. Indeed, areas where we had made an intervention, however minor, fared much better than areas without. After the dryness of summer it was unexpectedly thrilling to see water flow, vegetation spring up around the branches we stacked across drainage lines, and most of all, creek banks where we’d removed car bodies didn’t slump and be carried off into the neighbouring paddock.

A sunbaked headcut before and after: now with rock mulch on contour above the headcut to slow sheet flow, indigenous plantings on contour and bare patches sown with perennial ryegrass

Especially exciting were the few unexpected areas where the gullies began to suggest how they might work as a creek. Dense groundcover, thick mulch and fallen timber helped to trap sediment, slow flow and ultimately begin the formation of a chain of tiny billabongs. Here the water sat for some days, the kangaroo tracks revealing the popularity of a new watering hole.

Resident joey, licking his chops at the prospect of new seedlings

In other parts of the property however, all was not well. Runoff from the heavy rains were funnelled down cracks in the clay that were too slow to close and the water began tunnelling under the surface. There is little authoritative research or advice for lo-fi tunnel erosion strategies, so we applied our usual technique of rock mulch on contour, organic matter to improve soil structure and plants to bind and shelter soil and draw water from beneath the surface. In particularly dubious areas, we also broadcast perennial ryegrass seed as an additional soil binding strategy.

Sophie gets stuck into some more planting around a tunnelling site after contours have been measured with home-made A-frame. Tree guards here are recycled vine guards, fixed together in pairs to make larger, hexagonal guards.