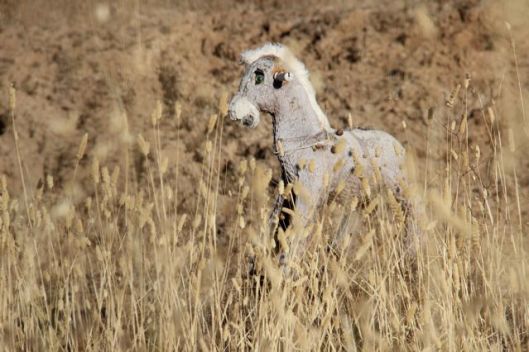 If anyone asks, we’re “agisting ponies”. This terrifying rocking horse oversees one of the rubbish piles.

As we’ve noted in our curated collection of farm-found rubbish, the largely idyllic setting of the property masks a narrow badland of erosion gullies repopulated with human trash. It’s bizarre sifting through it, a process of contemporary archaeology that often strays towards the forensic as we imagine the human story behind the array of objects gradually becoming swallowed beneath sediment and phalaris grass.

One of our missions is to clear the large rubbish from the gullies, increasing their habitat value and allowing us to more effectively address erosion and revegetation, while also allowing for the reuse and recycling of the accumulated items. On a blazing February morning, we helped a local scrap dealer begin to extract recyclable metal from one of the most dramatically eroded gullies. In an hour and a half we had well over a tonne of metal, in the form of a deep freeze (packed with coral, rainbow-coloured aquarium stones and empty tins of bourbon and cola), two washing machines, an electric oven and stove, a motorbike, three BMX bikes, an exercise bike, venetian blinds, chook wire, corrugated iron, steel tubing, downpipes, engine parts, metal drums, wheel rims and homemade farm machinery.

Another horse toy. Although happy, this one is missing its body. Perhaps dumped by a ‘Godfather’ fan.

While the bulk of the rubbish is metal, it is spiked with domestic detritus: seemingly endless quantities of shoes, including a pair of Dunlop K26s, twisted and buckled out of shape, their tops shrunken and pulling away from perishing soles. There is an abundance of polyester clothing, faded in the dust and sun, but still largely intact; mattresses corroded back to a bed of rusty springs; a school polo shirt, the logo of the local area school starting to dissolve into a collection of random letters. 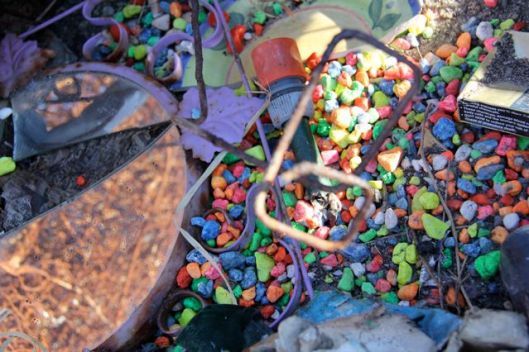 It’s a modest beginning, to see a few new patches of soil and creekbank opened to the sun after however-many years submerged under corrugated iron. While there may be some bits that we can never extract, it marks a milestone for us in starting to effect visible change on the landscape. We look forward to sharing photos of the gullies in a few years time, nifty before-and-after shots that reveal the transformation!

This one’s cruised its last landscape. Make an offer!

Thanks to everyone who came joined us on our farm tour as part of @historyfestival and @heritagefleurieucoastfestival - we really appreciate your interest and enthusiasm!
We're honoured to have this story pop up on @abcnews_au sharing some of the work we've been doing to regenerate our patch. Our deepest thanks to all the friends, neighbours and family who have helped transform the property over the last decade!
It's been a good year in our little orchard, with plenty of ripe figs for us - and others! Here's one we found, positioned just like this on top of a fence post. I'm looking for a raven with fig juice running down its chin.
It might have an Instagram-unfriendly level of detail, but here's a comic Joel's been working on about our relationship with a particular weed, and some of the people who have inspired us to rethink how we manage it. You can have a look at the whole thing on our blog.
For the last few years we've been planting acorns in our front paddock. They're for Holm oaks (Quercus ilex), adapted to a similar dryland Mediterranean climate as ours. They're evergreen, and in decades to come will offer shade, fire suppression and both stock and human feed throughout their acorns. They're slow growing at best, but we've been able to get them growing with mulch, complete organic fertiliser and occasional watering. We've sliced pickle barrels into rings and partially buried them to form a well to hold water in the root zone when watering. The difference between those with and without the wells is pronounced. This little one is perhaps 3 years old, direct seeded.
After a couple of years, our stone terrace garden is complete and freshly planted with a pomegranate, mulberry and loquat. Thanks to @anacotillasprings for the stone! The scraps of mesh and sheep panels will keep the kangaroos off while we establish the garden.
The nopal with a fighting spirit! 💪 For years this single old prickly pear pad sat in a metal bucket only half full of soil, repeatedly gnawed at and knocked over by roos and presumed to be long dead. A bit of heat and dose of summer rain and what a resurrection! With its delicious fruit and young pads, we are so lucky to have such tough plants in the world!🌵#opuntia #pricklypear
We have reached a major milestone with the arrival of a Superb Fairy-Wren family! This is one of the species we have most been trying to attract by planting plenty of dense bushes for cover. In the end they used chest-high brassica weeds to hop up from the Anacotilla creek valley, and have set up a nest in one of our Old Man Saltbushes. One blue male and two brown females/juveniles can now be heard merrily cheeping as they flit along our wildlife corridors from saltbush to saltbush to kangaroo thorn to feral fig tree - just goes to show weeds have their place in habitat creation! 🌿 (this image taken at a different location). #maluruscyaneus #superbfairywren #fleurieucoast
"The best fertiliser is the farmer's footsteps," goes the old proverb, so we try and make a habit of walking and observing what's going on, whenever we can. Here's a few spring time happenings: Christmas beetles arrive, shinglebacks on the move, callistemons in a pollination frenzy, and roos chilling in the shade in small family groups. Observing helps us to understand what's working and inspires us to keep going.