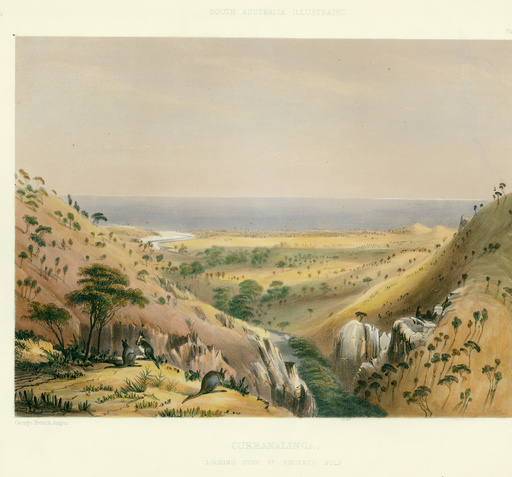 At the time of European colonisation, the Fleurieu Peninsula was most likely covered with a mosaic of woodland, forest and grasslands, maintained through Aboriginal burning and land management practices. In his paper on the discovery and settlement of the Fleurieu (1986), Rob Linn draws from the diaries of settlers in his descriptions of the landscape of the South Western Fleurieu. Writing in 1838, William Giles described the landscape around Rapid Bay, as “a most beautiful valley, the soil of great depth covered with most luxuriant herbage … on the sides of these hills we found plenty of keep for sheep, and wherever the grass had been burnt in these places it was looking beautifully verdant … fine land, excellent water, plenty of timber …” This was echoed by John Stephens in 1839, describing the “country from Cape Jervis upwards” as “very picturesque” and “well-timbered” (Linn 1986). END_OF_DOCUMENT_TOKEN_TO_BE_REPLACED 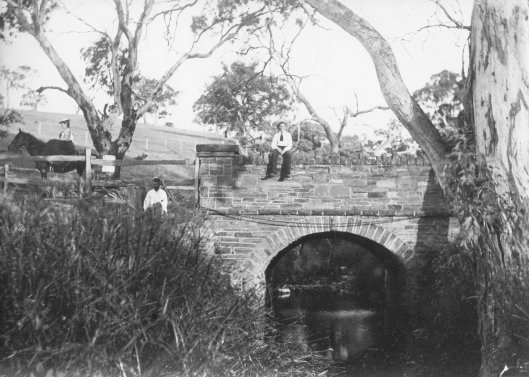 Our farm, Yarnauwi, is one lot of the once expansive Anacotilla pastoral property. Just over the ridge, in the Anacotilla river valley, are the old workers’ cottages, and on the hillside opposite, the sprawling homestead and outbuildings. We’ve recently been corresponding with the Yankalilla and District Historical Society about our interest in the property’s history, and they shared with us a number of photographs from the late 1800s onwards. 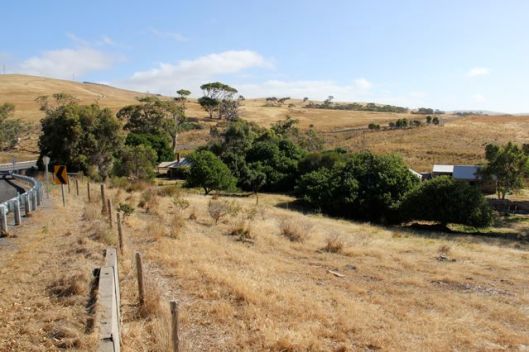 The Anacotilla cottage and outbuildings, 2014, viewed from Main South Road, near Paradise Drive. While the cottage has undergone substantial additions and renovations, the original two-room dwelling still exists at its centre.

END_OF_DOCUMENT_TOKEN_TO_BE_REPLACED

Second Valley jetty in the 1960s, looking north towards Normanville.

In this special guest post, Joel’s dad Jeff Catchlove shares some of his memories and photographs from camping trips to the South-Western Fleurieu in the 1950s and 60s.

Second Valley has always been close to my heart. I’ve just turned 70 and reminiscence is inevitable. Our childhood was unencumbered – most of us were poor, though we didn’t know it. There was no TV but we just as eagerly listened to Biggles, Hop Harrigan, the Goons and Hancock’s Halfhour on ‘the wireless’. We also played outdoors every day, both at school and at home. Children’s books were limited to Enid Blyton, Captain W E Johns and Eagle or Daily Mail Annuals. We dressed in suits to go to ‘town’ on the trolley bus or train and the family acquired its first car when we were ten or so years old. That revolutionised the possibilities of where we could go as a family. Our FJ Holden quickly ushered in trips to Mt Gambier, the Great Ocean Rd, even Queensland so my dad and we could visit his Air Force mates again.

Camping at Second Valley in the 1960s, complete with a week’s worth of rations.

END_OF_DOCUMENT_TOKEN_TO_BE_REPLACED

Swarming season is on! And happily we have awesome neighbours who were keen to help capture and adopt a hive! This mob have now settled in to their new home across the road and up the hill. 🐝🌻🍯
Perfect day for making sun prints!
First brown for the season! I think it was too cold to be able to move off! #pseudonajatextilis #easternbrownsnake
Very excited to spend a day with the Junior Field Naturalists at Frahn's Farm near Monarto helping with bird banding for habitat monitoring. Fantastic to check out the amazing work of Dr. David Paton and @bior_aus in large-scale habitat restoration too! We're inspired all over again to keep revegetating and rebuilding habitat on our patch of the Fleurieu.
It's happening! One of our aims at Yarnauwi has been to create habitat for small woodland birds, and this week we spotted this one cavorting in the emerging canopy. While Grey Fantails are pretty common, they do need trees - something that was absent from the farm 10 years ago. We're thrilled this one found our patch. Now it just needs to invite some friends.
Joel's "Fishes of the Fleurieu Coast" print is now back up on our Etsy shop, featuring 14 common fish you can spot at Second Valley and beyond. This might be the last run of these, so get in quick! Link in bio. 🐟🐡🐠
Nine years ago, this patch of ground was an over-grazed and eroded hay paddock. Each winter our amazing community of friends and family have returned for tree planting, cultivating an emerging woodland that offers habitat, shelter, timber, firewood, erosion control, seed, water cycling and food. In this time we've seen the return of fungal networks, bird species, a universe of insects and more. With the help of our friends we can't wait to see what the next 9 years might bring!
This week Joel headed to Meningie for a workshop on dry climate farm forestry with agroforestry legend Rowan Reid. Great to have a look at plantations of some of the trees we've started growing and get plenty of practical direction on how to manage our trees. Check back in 25 years for great deals on farm milled timber!
Had such a lovely time camping at Yarnauwi last weekend! 🌌Great skies, stars and company, and what a difference a few trees makes compared to our camping days of old! 🌳