The ‘before’ photo: 800 new plants in position. Stay tuned over the next 20 years for the ‘after’ shot.

Over the weekend of the 12-13 July, around 30 dedicated volunteers descended on TBC for our annual tree-planting fiesta. Over two days, we managed to plant some 800 locally indigenous plants in the two ‘wilderness zones’, kick-starting their transition back to pink- and red-gum woodland. The first area was planted outwards from the former Bee House (currently tree-planter snack dispensary and rain shelter) with around 600 plants selected to address the water-logging in the area and to revegetate in and around erosion gullies. The second area saw the planting of around 200 plants, radiating from the existing remnant redgums. Once again these plants were selected to address water-logging and erosion as well as provide shelter to adjacent paddocks. Over the following week, we dodged thunderstorms and icy squalls to add another 150 or so plants, with about 200ish to go! 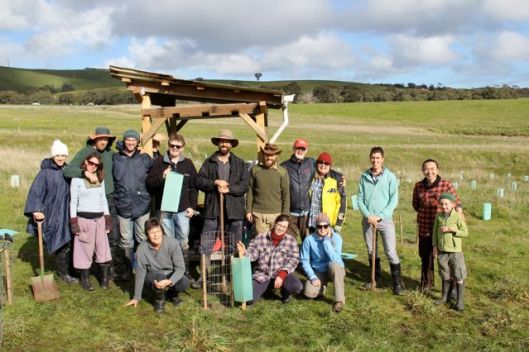 The Bee Team (minus a few), from day one.

The Tree Team (minus a few more), from day two.

While the vegetation cover of the erosion gullies is improving since stock have been excluded, we’ve also observed that they have their own extreme microclimates. In winter they’re bare and swampy, in summer they’re bare and arid, with noticeably higher temperatures that the surrounding land. A focus has been to also work to grow canopy to allow shading of the gullies and greater potential for more complex vegetation to establish. 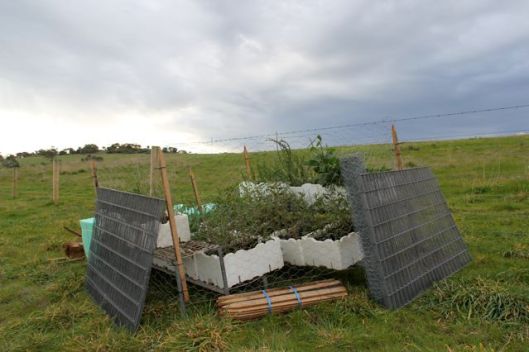 A dawn shower rolls over Second Valley’s cliffs on the first day of planting. 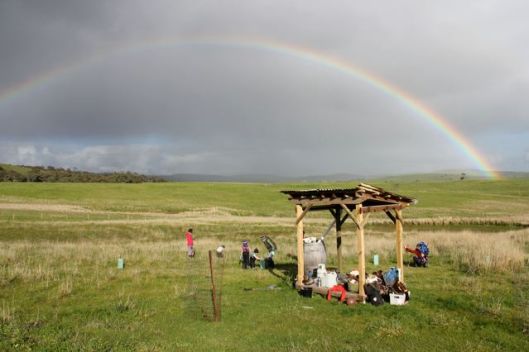 The kids planting brigade makes a start around the Bee House. 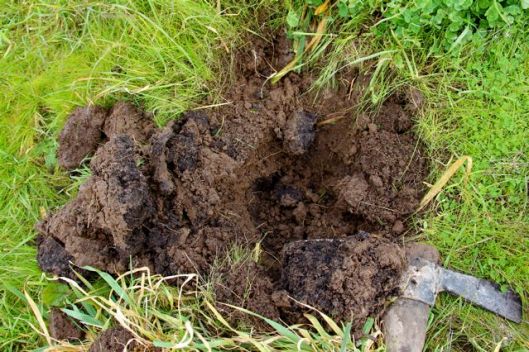 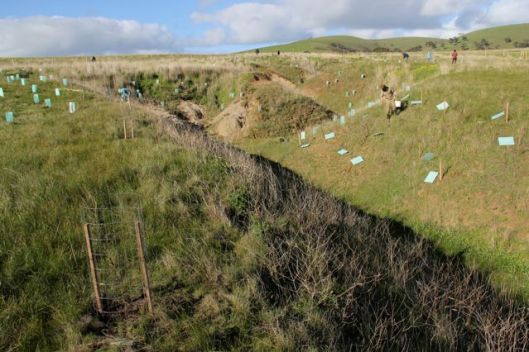 Hard at work, with quality control officer Richard putting everyone through their paces.

Sean and Nat dig in the undergrowth. 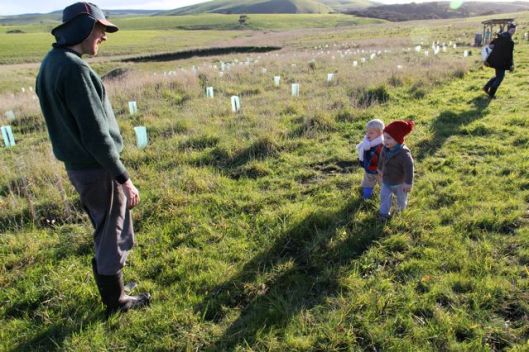 While we’ve written elsewhere about the structure of woodland, we’ve gone for a high planting density based on previous experiences with enthusiastic grazing by kangaroos and deer. We’ve also amped up protection for particularly high value trees, selected according to species, shelter, habitat or erosion control value with the use of both homemade and purchased wire mesh guards. Throughout the planting, while the resident mob of kangaroos perched on a nearby hill and noted the GPS coordinates of every tree as it went into the ground, we’re pleased to say that they’ve so far been quite restrained in their sampling! Perhaps the sudden appearance of all those green tree guards has spooked them a little. We’ll see.

Regeneration happens by itself, too!

Now in our second year, we’re fine-tuning our tree-planting process. By the second day, we’d adopted what we’re calling the Hoepfner Method. It goes something like this: firstly, layout your tree guards and stakes, then dig all your corresponding holes, then plant all your plants, then peg in your tree guards. If you have a group, then you can divide up these tasks amongst the group. We found this to be effective in ensuring everyone knew what they were doing, and it also allowed for plant positioning to be somewhat planned where required. The use of the tree guards as markers is also avoids the losing of holes or unplanted seedling in long grass.

From where we'd rather be...actually there's nowhere we'd rather be! Big thumbs up for the kids' new hammock under the old gums. So glad to finally be here at last! Happy 2023 all 🌿
First fig of the season. A monster Black Genoa, organically grown in our little windswept orchard.
As proof of the recent confusing weather patterns, these Amanita mushrooms came up a few days ago! We've never seen mushrooms here in November, they're usually all finished by August, and we've never seen this species or anything like it here before! Amanitas are mycorrhizal (they form a partnership with a tree/plant to help feed and nourish it in exchange for sugars) and these ones were growing only 1m or so from a Eucalypt we planted about 7 years ago which has always grown really well. I just wonder if this species has been there all along, waiting for perfect conditions of 45mm in one day in Nov to be able to fruit! And now it can reproduce and spread to other parts of the farm. It makes me wonder what else is out there ready to take advantage of crazy climactic conditions!
As long time admirers of @thegreenhorns we're thrilled that Joel's comic about weeds will be published in Vol. VI of "The New Farmer's Almanac". It all releases this January and pre-orders are available now through @chelseagreenbooks
Frog spawn! 🐸 We've never seen this before at Yarnauwi but with the best rains in years our dam is filling up, the air is full of the calls of the Spotted Grass Frog and the Common Froglet, and we seem to be providing enough grassy water habitat for these eggs to be laid with enough shelter for them to grow into the little black tadpoles you can see inside! Lying next to the dam listening to frog calls definitely takes us to our happy place and makes it all so very worthwhile 💚
2022 marks a decade since we started working to regenerate Yarnauwi. To celebrate Joel's been working on a little comic to acknowledge all the amazing folks in our community near and far who have supported us and this place over the last 10 years. Here's a sample, but the whole thing is on our blog - follow the link in our bio!
Thanks to everyone who came joined us on our farm tour as part of @historyfestival and @heritagefleurieucoastfestival - we really appreciate your interest and enthusiasm!
We're honoured to have this story pop up on @abcnews_au sharing some of the work we've been doing to regenerate our patch. Our deepest thanks to all the friends, neighbours and family who have helped transform the property over the last decade!
It's been a good year in our little orchard, with plenty of ripe figs for us - and others! Here's one we found, positioned just like this on top of a fence post. I'm looking for a raven with fig juice running down its chin.