Kangaroos: so cute, yet so merciless.

One of winter’s most exciting prospects was the chance to get some trees in the ground. Our strategy for revegetation has been to try to build islands of vegetation in the most vulnerable areas, with the view to expanding them outwards until they connect up. We were aware that the kangaroos would take an interest, but just how much of an interest we were unprepared for.

Our first planting season was always going to be an experiment. We’re still learning how the landscape works, we have minimal fencing, and swung between being thorough (marking and planting along contours) and haphazard in our plantings in an effort to see what might work best. From browsing the internet and chatting to neighbours, we heard a number of ideas for protecting trees from kangaroos, many involved guns, some suggested removing the growing tips when planting as this is the most delectable part of the plant, and others suggested using prickly plants such as Acacia paradoxa as nurses for more vulnerable seedlings. The most consistently suggested method was building heavy-duty mesh tubes, a metre or more high, fixed in place with a pair of star-droppers. However, given the cost involved and our hope to plant up to 1000 plants a year, this wasn’t really an option for every plant.

We started out by using the standard green corflute triangular guards with single hardwood stakes, augmented by white corflute vineguards. When planting we joked that the kangaroos would use the guards as a napkin and the stakes as a toothpick for their seedling meal, without realising how close to the truth this would end up. We later also developed guards made of 90cm high tubes of chook wire, cable-tied to a hardwood stake with a vineguard placed inside for wind protection.

White corflute vine guards: individually, they’re too small, but zip two together into a hexagon and hold in place with two stakes and they work ok. No match for wind or deer however.

At the end of the winter, and after planting about 400 plants over several days, we have about 150 left. In some areas the hit rate was high, with 47 out of 50 plants eaten or pulled out. Exposed areas that had been slashed seemed to fare the worst, perhaps because the new growth after slashing attracted grazing in the area, and the constant winds loosened or removed guards making it easy for the roos to finish the job. Areas in gullies, on slopes or, interestingly, near piles of junk, generally fared much better. 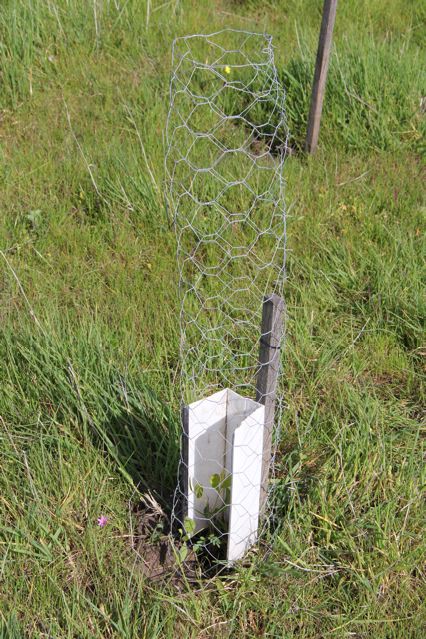 Improvised chook wire and vineguard option. Apparently easier to destroy than they look.

While the green corflute still seems to be the best all-rounder, in exposed areas we would have spent at least as much time collecting wind-blown guards from fencelines as we did planting. The vineguards proved to be no match for the weather or the roos. All but one or two of the chook wire guards have been removed and trampled. Even a heavy-duty-mesh-and-star-dropper combo had been body-slammed almost out of the ground. But then, we noticed a new player has arrived on the scene: the mud at the bottom of the gullies was peppered with the fresh tracks of fallow deer, and little survived their attentions.

While everything has copped a nibbling, the species that fared the best thus far are Kangaroo thorn (Acacia paradoxa), Prickly tea-tree (Leptospermum continentale) and Seaberry saltbush (Rhagodia candolleana).

By next planting season we hope to have fenced the main reveg areas, providing an additional deterrent. We’ll use the survivors as nurse plants where we can, plant densely starting on less accessible terrain, and use the heavy-duty-mesh-and-star-dropper-combos for selected plants that we want to form a canopy or wind protection for future growth. The survivors have got through a winter of torrential downpours and driving winds and evaded the jaws of roos and deer, all they need to do now is survive six months of desiccating heat. Grow well little seedlings!

Swarming season is on! And happily we have awesome neighbours who were keen to help capture and adopt a hive! This mob have now settled in to their new home across the road and up the hill. 🐝🌻🍯
Perfect day for making sun prints!
First brown for the season! I think it was too cold to be able to move off! #pseudonajatextilis #easternbrownsnake
Very excited to spend a day with the Junior Field Naturalists at Frahn's Farm near Monarto helping with bird banding for habitat monitoring. Fantastic to check out the amazing work of Dr. David Paton and @bior_aus in large-scale habitat restoration too! We're inspired all over again to keep revegetating and rebuilding habitat on our patch of the Fleurieu.
It's happening! One of our aims at Yarnauwi has been to create habitat for small woodland birds, and this week we spotted this one cavorting in the emerging canopy. While Grey Fantails are pretty common, they do need trees - something that was absent from the farm 10 years ago. We're thrilled this one found our patch. Now it just needs to invite some friends.
Joel's "Fishes of the Fleurieu Coast" print is now back up on our Etsy shop, featuring 14 common fish you can spot at Second Valley and beyond. This might be the last run of these, so get in quick! Link in bio. 🐟🐡🐠
Nine years ago, this patch of ground was an over-grazed and eroded hay paddock. Each winter our amazing community of friends and family have returned for tree planting, cultivating an emerging woodland that offers habitat, shelter, timber, firewood, erosion control, seed, water cycling and food. In this time we've seen the return of fungal networks, bird species, a universe of insects and more. With the help of our friends we can't wait to see what the next 9 years might bring!
This week Joel headed to Meningie for a workshop on dry climate farm forestry with agroforestry legend Rowan Reid. Great to have a look at plantations of some of the trees we've started growing and get plenty of practical direction on how to manage our trees. Check back in 25 years for great deals on farm milled timber!
Had such a lovely time camping at Yarnauwi last weekend! 🌌Great skies, stars and company, and what a difference a few trees makes compared to our camping days of old! 🌳